Christie’s Funeral Home & Crematorium is the oldest continuous business in Yorkton, but is also one of the most modern. It has continued to make investments in new and improved facilities in order to exceed customer expectations.

In 1882 Mr. & Mrs. J. W. Christie, together with their family, settled in Yorkton, just ten years after the arrival of the first settlers. A carpenter by trade, Mr. Christie began contracting and many of Yorkton’s early homes and businesses were built by him. Yorkton’s first Cottage Hospital, The Collacott Block, The Dunlop Block, and Yorkton Flour Mill were built under his supervision. Mr. Christie built hand-made caskets until 1897 and was Yorkton’s first licensed undertaker. The original Funeral Home established in 1894 and located at 22-5th Ave North in Yorkton is where these caskets were built and later became a fully functioning funeral home. Mr. Christie personally conducted arrangements for most funerals in Yorkton before his retirement in 1930. J.W. Christie passed away on August 6th, 1938 and the business was succeeded by his son, Charlie Christie.

Following Charlie’s passing, a short while after his father, Christie’s Funeral Home was sold to George H. Gunn and John Chambers in 1959 and retained the original owners name. In 1973, John McPake purchased Christie’s Funeral Home and changed the name of Christie’s Funeral Home to Christie-McPake Funeral Home. John sold the business to Allan and Janet Hill in 1979. The Hill’s named the funeral home Christie-Hill Funeral Chapel and rebuilt to its present location on 121 Palliser Way. Due to increasing demand, they chose to include an on site crematorium in the expansion, to better serve their clients thus becoming Christie-Hill Funeral Chapel & Crematorium. Allan owned Christie-Hill for 27 years before selling to longtime employees, Vern & Kathy Novak. Vern & Kathy operated the funeral home until December 1, 2017 when they passed it on to Joe and Kimberly Coffey.

Vern & Kathy felt it was only right to return the funeral home to the original name of Christie’s Funeral Home because after 113 years of continuous business, both were proud and honored to be part of Yorkton’s original heritage. They have also kept this establishment an independently owned funeral home and have taken seriously the logo of “A Tradition of Trust.”

In 2017, after many years of service to the Yorkton community, Vern and Kathy retired, selling Christie's to Joe and Kimberly Coffey of Roblin, MB. With over 20 years in funeral services, and a lifetime spent locally, Joe and Kimberly plan to continue to provide the great service you associate with Christie's and continue to earn your trust.

A Tradition of Trust since 1893 - Celebrating Life & Preserving Memories, One Family at a Time. 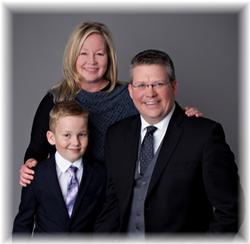 "Whatever a family needs, yes is always the answer."

A year of daily grief support

Our support in your time of need does not end after the funeral services.  Enter your email below to receive a grief support message from us each day for a year.  You can unsubscribe at any time.